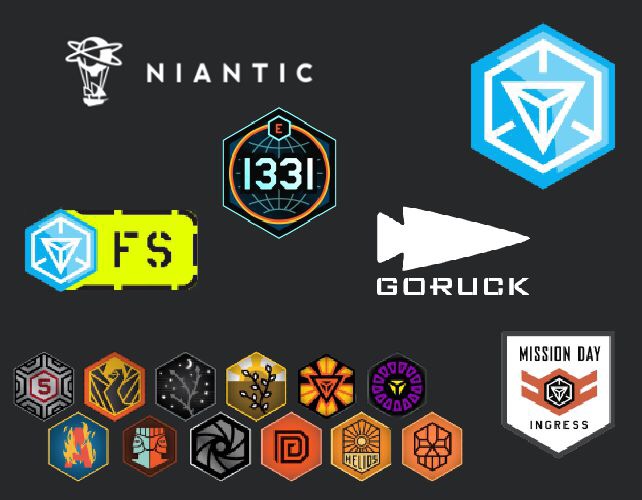 Ingress is not just a game, its a battle for humanity!

This battle is not only happening in your neighbourhood, but all over the world. Niantic created events to bring people together and fight for their cause. It also gives a new dimension into the Ingress gameplay. The main two events that Niantic organizes are and Anomaly and a Mission Day. Besides those, you also have the following events:

Go-Ruck
With the coming of the Go-Ruck Challengen, competition within Ingress is taken to another level. By physical and mental challenges your team will face, you can win information about the upcoming Anomaly connected to the Go-Ruck event you are participating. There are two versions. "Urban OPS" and "Stealth OPS". The main difference is the intensity of the challenge. Urban takes about 4 hours and requires average  efforts. Stelth however, will take up to 10-12 hours and will ask you to go to the extreme of mental and physical efforts. Check out this short film to get an impression of a Go-Ruck event.

NL-1331
Niantic organises annual promotional tours around the world. This involves a promotional team, touring through for instance the US, Europe, Asia or Australia in a van or bus. Every one or two days, the van will arrive in a new major city and local players of (usually) both factions organise a get together at a suitable location.
At the get together the van or bus will become a mobile portal that is to be hacked as often as possible (this is measured), there are sometimes dead drops, a number of give aways and other surprises. Official Niantic Ingress gear can also be ordered through presale.
These events are generally visited by roughly 30-100 players of both factions and are foremost nice get togethers with players from all over the country, and a lot of swag trading.

Ingress FS
Once a month First Saturday events are organised in cities on all continents. First Saturdays are being organised by the local (cross faction) community. Every agent is welcome, recruit or experienced player, it doesn't matter.
Goal of the event is partly social and partly competitive. During the event a number of prizes can be won in different categories, for example most AP earned, largest distance walked, largest number of level ups…. The style of play is very simple, play Ingress! whatever style of play you prefer (build, destroy, bannering) it might be your ticket to win some nice prizes. After the event it is time for food, drinks, Swag and of course the prizes!
First Saturday events are there to strengthen cross faction relations and are ideal for leveling new recruits.

„The World around you is not what it seems.“