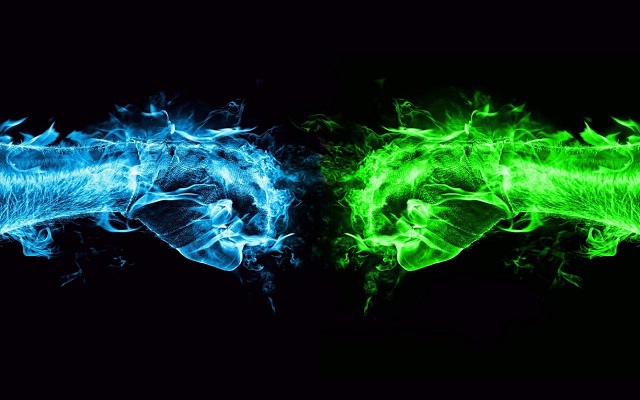 As mentioned, Ingress is being played between two teams. Both teams have the goal to win, but the story behind the Ingress game shows us, it is more then just two colors fithing against each other, Both teams have different views.

"The Shapers"
This is the alien lifeform who landed on earth. They spread an exotic matter to evolve humanity to a higher level. This exotic matter is named XM. The XM is spread around the world through portals. The portals spit out the XM so it can spread among humanity. How this works is not clear to any human on earth. the shapers are unclear about how it works and sometimes it even looks like they don't spread the XM with good meaning.
This is the reason there are proponents and opponents to the coming of the Shapers. They both fight against each other for their own believe in saving humanity,

"The Enlightened"
The proponents of the shapers are the Enlightened, The green team. They are convinced the shapers only mean good and they truly want to evolve humanity on earth. The Enlightened try to conquer the portals so the XM can freely do its job to spread among humanity.

"The Resistance"
The opponents of the shapers are convinced the Shapers don't have good meaning in spreading the XM and that the XM is dangerous for humanity. The Resistance, the blue team, tries to conquer the portals and makes sure the XM does not spread among the globe. The believe the Shapers are using the XM to make humanity their slaves for their own world.
Read everything about our belief here and the reason you can help us fight against the Shapers and save humanity. Let humanity live free!